The 2016 Championships, were hosted by the Finnish Sports Association of Persons with Disabilities to promote transplantation success and encourage organ donation in Finland.

Two international transplant sports events took place in Vantaa in parallel The European Heart and Lung Transplant Championships and the European Transplant and Dialysis Championships. In addition, during the week there was an International Youth Camp for children with organ transplants and a Transplant Sport Symposium of Research Worskshops and Medical Lectures. To raise awareness of organ donation and transplantation among the wider public they also organised Sport for All events at shopping centres and marketplaces. To broaden their appeal they also hosted the Helsinki Cup one of the World’s biggest junior football tournaments which included a a special exhibition match with some of Finland’s top players.

It was a very full schedule for the organisers and we hope they were successful.

Over 200 competitors from 16 countries took part in the European Heart and Lung Transplant Championships.

some pictures of the games

The Opening Ceremony held near City Hall was unfortunately a slightly damp affair but as the organisers had provided everyone with clear plastic poncho’s most people stayed relatively dry.

Tuesday began bright and sunny and coaches began taking athletes to the first day of events. So began the round of early morning starts and late night finishes typical of these Championships. As they progressed throughout the week competitors and supporters alike began new friendships and caught up with friends made at previous games. At the end of each day teams could socialise and review their days experiences over dinner in the hotel.

Having had good weather for the past three days, it was a disappointment, on Friday at the Athletics event as it started to rain almost straight away. However not to be deterred supporters huddled under umbrellas as best they could while transplants ran, jumped and threw. However, as the day progressed the rain worsened and after careful thought for athletes safety, the event was called to halt. By the time everyone had returned to their hotels, the rain had stopped and the sun had returned.

It meant everyone was early for the Gala Dinner. After a few speeches of thanks to the organisers and congratulations to the transplants for taking part, came the presentation of special trophies to athletes who had excelled and a surprise presentation of a trophy for the best team to Great Britain.

Then came music, dancing and the exchange of contact details so that transplants can keep in touch whilst looking forward to the next European Heart and Lung Championships in Lignano, Italy in 2018.

Results of the EHLTC ➜ 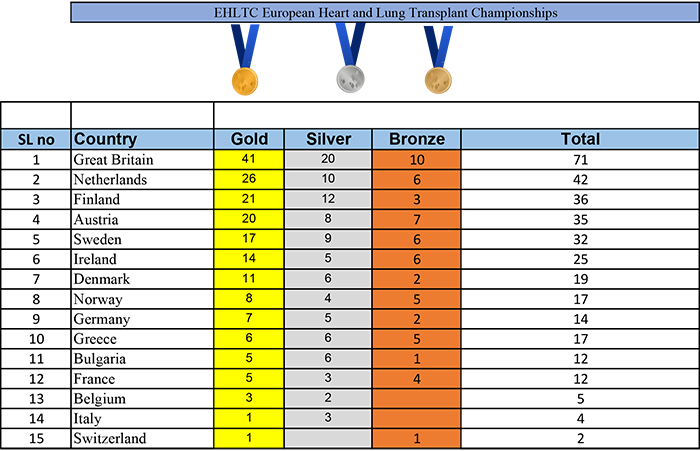 or email us at This email address is being protected from spambots. You need JavaScript enabled to view it.